Egg prices rose and remained high during and after the 2014-15 U.S. highly pathogenic avian influenza outbreak 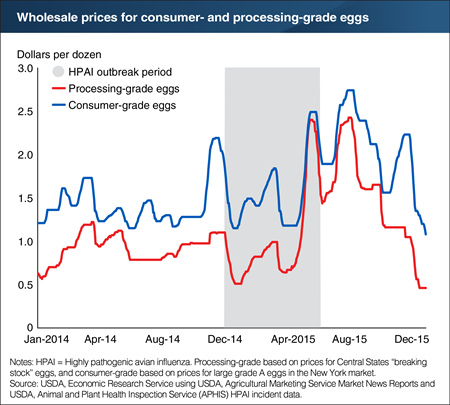 Highly pathogenic avian influenza (HPAI) caused the loss of more than 50 million U.S. chickens and turkeys between December 2014 and June 2015, the largest poultry health disaster in U.S. history. More than 80 percent of bird losses were recorded between April 17 and May 19, 2015. Table-egg laying chickens accounted for a large majority of the lost birds; about 12 percent of the U.S. table-egg laying chicken flock was lost. As production fell, egg prices rose sharply. May-December 2015 prices for consumer-grade eggs were 61 percent higher than the previous year. The price increase far surpassed the production losses on a relative basis, reflecting what economists call inelastic demand, meaning that the quantity demanded of a good is not particularly sensitive to changes in price. Consumers did not cut back on their demand, i.e. purchases, even when prices rose, pushing prices even higher. Price increases for processing-grade eggs, often used by restaurants, bakers, and other commercial operations, rose, too. This reflects commercial users’ inelastic demand due, in part, to the difficulty they face in finding substitutes for eggs in their products. A version of this chart appears in the April 2018 ERS Amber Waves article, "Egg Price Impacts of the 2014-15 Highly Pathogenic Avian Influenza Outbreak."