Highly pathogenic avian influenza (HPAI) caused the loss of more than 50 million U.S. chickens and turkeys between December 2014 and June 2015, the largest poultry health disaster in U.S. history. More than 80 percent of bird losses, totaling 39 million, were recorded between April 17 and May 19, 2015. The majority of infections emerged in the Midwest from wild birds during seasonal migration. In a new report, ERS researchers found that substantial market impacts resulted from lower poultry supplies as well as from HPAI-related trade restrictions in many destination markets for U.S. poultry products.

Table-egg laying chickens accounted for a large majority of the lost birds, losing about 12 percent of their flock based upon inventory numbers from April 1, 2015. Egg production declined for about 9 months, with a 10-percent reduction in May-December 2015, relative to a year earlier. Egg prices rose sharply, as May-December 2015 prices soared 61 percent higher than the previous year for the USDA benchmark price in New York. The price increase far surpassed the production losses on a relative basis in this period, reflecting what economists call inelastic demand, meaning that the quantity demanded of a good is not particularly sensitive to changes in price. Previous research suggests that eggs are among the most price inelastic of food commodities. Egg consumers are less likely to reduce purchases when prices climb, creating the potential for prices to surge when supplies run short. This tendency would help explain why egg prices surged after the HPAI outbreak.

Prices returned to lower levels in 2016 as the egg industry restored flock levels to pre-outbreak levels. 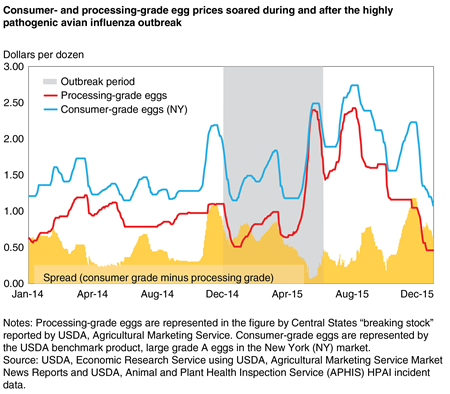