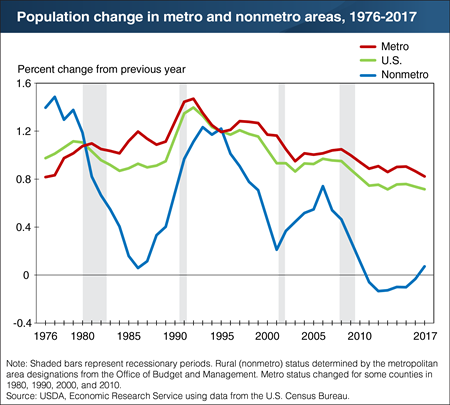 Between July 2016 and July 2017, rural (nonmetro) counties increased in population for the first time this decade, according to the most recent estimates released last month by the U.S. Census Bureau. The shift in rural population change was quite small, from a loss of 15,000 people in 2015-16 to a gain of 33,000 in 2016-17. However, it continues an upward trend in all but one year since 2011-12, when rural counties declined by 61,000 people. Population growth rates for rural areas have been significantly lower than in urban (metro) areas since the mid-1990s, and the gap widened considerably after the housing-market crisis in 2007 and the Great Recession that followed. The gap between rural and urban growth rates has narrowed slightly in recent years, but remains significant. Urban areas grew by 0.82 percent in 2016-17, compared with 0.07 percent growth in rural areas. The recovery in population growth for rural America during this decade has been much more gradual compared with previous rural population downturns. This chart updates data found in the September 2017 Amber Waves data feature, "Rural Areas Show Overall Population Decline and Shifting Regional Patterns of Population Change."