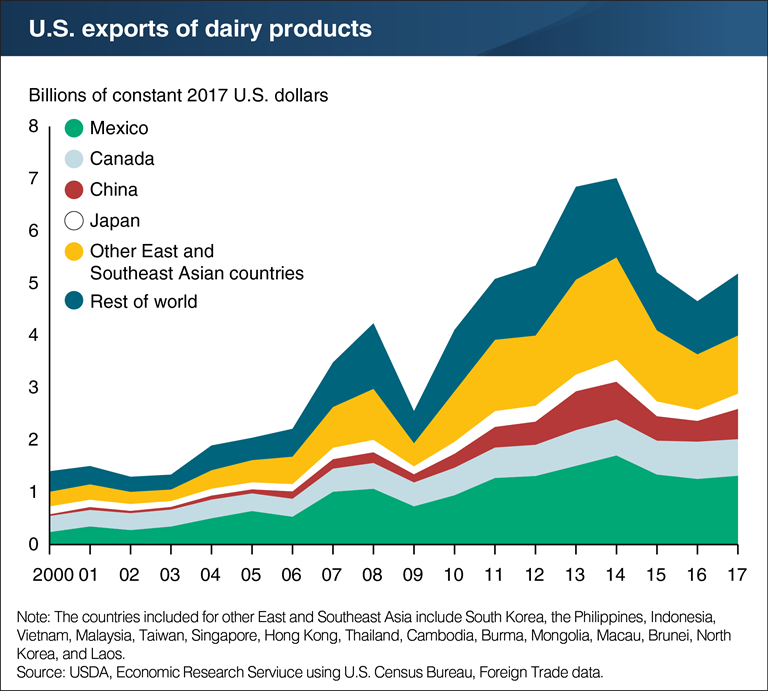 U.S. dairy product exports grew from $1.4 billion in 2000 to $7.0 billion in 2014 (valued in 2017 U.S. dollars), about a sevenfold increase. Income growth in East Asia, Southeast Asia, Latin America, and other regions has led to increased dairy consumption and demand. Additionally, China’s market-based reforms opened one of the world’s largest markets for dairy product imports, and the country is now the third largest market for U.S. dairy exports. Further, a reduction in domestic support and export subsidies for dairy products by the European Union (EU) and the United States has brought greater openness to world markets and has expanded overall global dairy trade. However, the value of U.S. dairy exports fell in 2015 and 2016 due to weaker growth in global demand for dairy products (especially from China), a Russian ban on dairy imports from several countries, a strong U.S. dollar, and the discontinuation of milk supply quotas in the EU. Global demand for dairy products rose significantly in 2017, and the value of U.S. dairy exports increased to $5.2 billion, a 14-percent increase compared with 2016. This chart is updated through 2017 and is drawn from the report, Growth of U.S. Dairy Exports, released in November 2016.