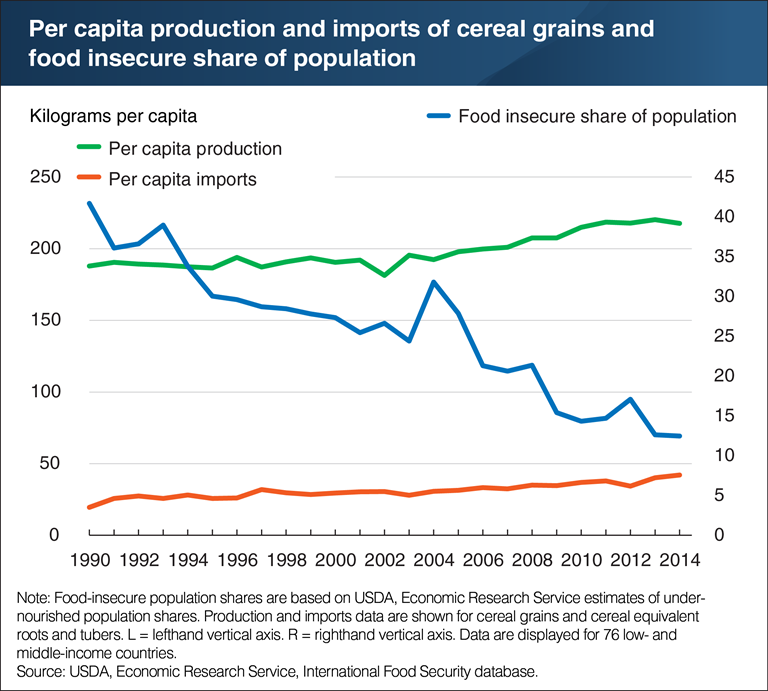 Global food security—when people have access to at least 2,100 calories per day—has improved over the past 15 years. Two key drivers of past improvements in food security are increased agricultural production and trade. Increases in production and agricultural productivity—producing the same or more output with fewer inputs like fertilizer or land—have improved food security. In countries where climate or lack of land or water resources limit the potential for local production, food imports have played an important complementary role. Since 1990, among the 76 low- and middle-income countries studied, production and imports of cereal grains and their equivalent has increased by 16 and 115 percent, respectively—although imports started from a much lower quantity. During this period, the share of populations experiencing food insecurity fell from 42 to 12 percent. Despite past success, challenges remain. Maintaining agricultural productivity growth as the global population rises will require investments to generate and deliver new technologies as well as efforts to broadly spread their adoption in food insecure countries. This chart appears in the February 2018 Amber Waves finding, "Progress and Challenges in Global Food Security."