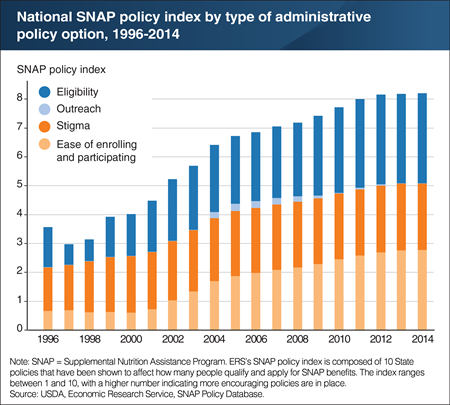 USDA’s Supplemental Nutrition Assistance Program (SNAP) is the Nation’s largest food assistance program. For much of the program’s history, administration of SNAP was largely uniform across States. However, welfare reform legislation in 1996 and subsequent legislative and regulatory changes have allowed States increased flexibility to administer some components of the program. ERS researchers recently developed an index that reflects how accommodative, or encouraging, State policies are to enrolling individuals in SNAP. This SNAP policy index is composed of 10 State policies related to eligibility, ease of enrolling and participating, participation stigma, and outreach to attract new participants. The index ranges between 1 and 10, with a higher number indicating more accommodative policies are in place. For the Nation as a whole, the index grew steadily from 1997 to 2014, meaning that States tended to adopt policies encouraging enrollment. Between 1997 and 2000, policies that relaxed eligibility and reduced stigma played the largest roles in the rising index. After 2000, policies that made enrolling and remaining in the program easier played a larger role. This chart appears in the ERS report, "Using a Policy Index to Capture Trends and Differences in State Administration of USDA’s Supplemental Nutrition Assistance Program", released on February 5, 2018.