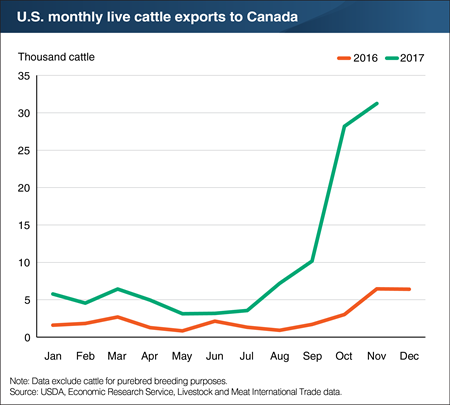 The United States imports a significant amount of live cattle from Canada and Mexico for use in beef production. The country is not a major cattle exporter, due largely to its role as the largest global producer of beef. Historically, the United States has exported breeding cattle and small volumes of beef and dairy cattle, primarily to Canada. In 2016, exports of cattle to Canada averaged 3,000 head per month. Beginning in September, however, monthly U.S. cattle exports to Canada jumped to the highest levels in over a decade, driven by a large spread in the price offered for cattle in Canada relative to the United States. Additionally, drought conditions in the U.S. Northern Plains in the second half of 2017 may have encouraged those in the area to sell off calves at a faster rate because of concerns about grass availability for grazing. This chart appears in the ERS Livestock, Dairy, and Poultry Outlook newsletter, released in January 2018.