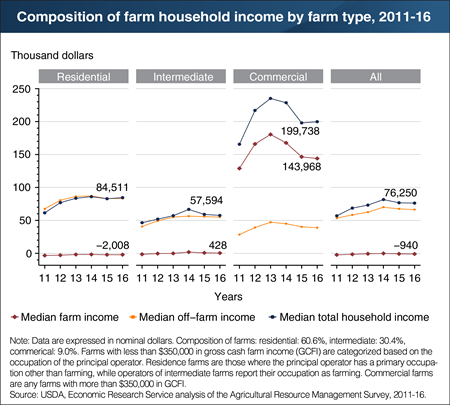 Most farm households rely on off-farm income, such as wages from a job outside the farm. Typically, only commercial farm households receive a substantial share of their income from the farm. For example, in 2016, the median farm income was negative $2,008 for households operating residence farms (where the operator primarily works off-farm or is retired from farming), while median off-farm income was $83,400. Households operating intermediate farms (smaller farms where the operator’s occupation is farming) also earn the bulk of their income from off-farm sources. In contrast, households operating commercial farms—where gross cash income is $350,000 or more—derive most of their income from the farm (nearly $144,000 in 2016). Changes to their total household income follow profits from farming. Most agricultural production takes place on commercial farms. In 2016, residential and intermediate farms together accounted for over 90 percent of U.S. family farms and one-quarter of the value of production. By comparison, commercial farms accounted for 9 percent of family farms and three-quarters of production. This chart is based on data from the ERS data product Farm Household Income and Characteristics, updated November 2017.