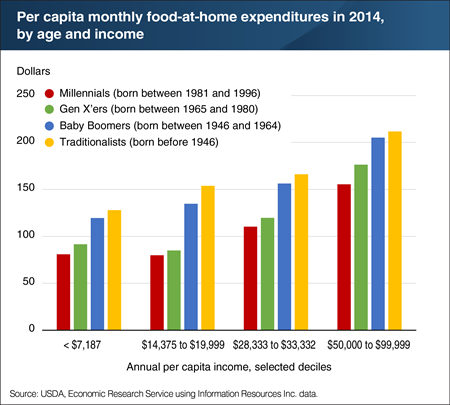 A recent ERS analysis of 2014 grocery store data found that compared to older generations, Millennial-headed households spent the least per person on food at home. However, like the other generations analyzed, Millennial households with higher incomes tended to spend more on grocery store foods than Millennial households with lower incomes. This is likely because poorer households have less income to spend on food at home. Even with this lower spending, lower income households still spend a higher share of their total food budgets in grocery stores. Traditionalists and Baby Boomers spent more per person on food at home in each of 10 income groups than Millennials and Gen X’ers. For example, of households earning between $14,000 and $20,000 per household member annually, Millennials spent just under $80 per month per person on food at home and Gen X’ers spent $85, whereas Baby Boomers in that income group spent $135 and Traditionalists spent $154. Differences in food-at-home spending between the generations may reflect the younger generations’ stronger preference for eating out, which may change as they age. A version of this chart appears in the ERS report, Food Purchase Decisions of Millennial Households Compared to Other Generations, released on December 29, 2017.