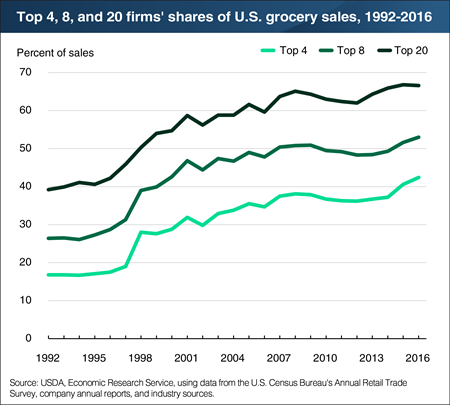 In 2016, the share of U.S. grocery sales held by the largest four and eight food retailers rose for the fourth consecutive year. Sales by the 20 largest food retailers totaled $515.3 billion in 2016 and accounted for nearly two-thirds of U.S. grocery sales. The shares of food industry retail sales recorded by the largest 4, 8, and 20 supermarket and supercenter retailers resumed their long-term trend of increased sales concentration in 2013 after decreasing slightly following the 2007-09 recession. Publix lost its spot in the top four food retailers in 2016 to Ahold Delhaize, which joined Walmart, Kroger, and Albertson’s. Much of the change in industry structure during the last few years was largely due to the impact of two big mergers—the acquisitions of Safeway by Albertson’s in 2015 and of Delhaize by Ahold the following year. Kroger has maintained its ranking, in part, by acquiring a number of smaller retailers such as Harris Teeter and Roundy’s during the last few years. Since 2013, 3 regional food retailers have joined the ranks of the top 20 due to mergers and A&P exiting the industry. A version of this chart appears on the Retailing and Wholesaling topic page on the ERS Web site, updated December 7, 2017.