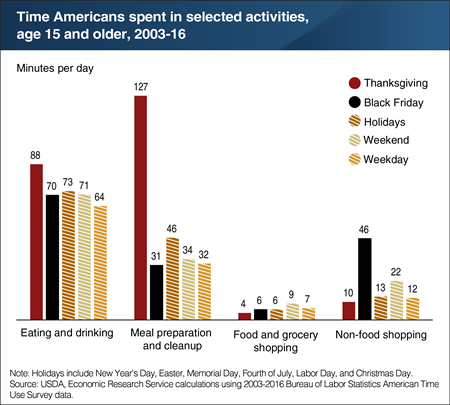 Do people really spend that much time preparing food, eating, drinking, and cleaning up the kitchen on Thanksgiving Day and on holiday shopping on Black Friday? The answer to both questions is, “Yes!” Over a survey period of 2003-16, Americans spent an average of 88 minutes eating and drinking on Thanksgiving. This was about 15 minutes greater than the time Americans spent eating and drinking on average for 6 other major holidays. Similarly, compared with the average for these non-Thanksgiving holidays, Americans spent much more time engaged in meal preparation and cleanup (127 minutes versus 46 minutes). Now, when it comes to the day after Thanksgiving, relative to other days, Americans tend to spend more of their time shopping for items other than food. Americans spent 46 minutes shopping for non-food items on an average Black Friday, which is about 250 percent higher than an average non-Thanksgiving holiday. More information on ERS’s Eating and Health Module of the American Time Use Survey can be found in ERS’s Eating and Health Module (ATUS) data product.