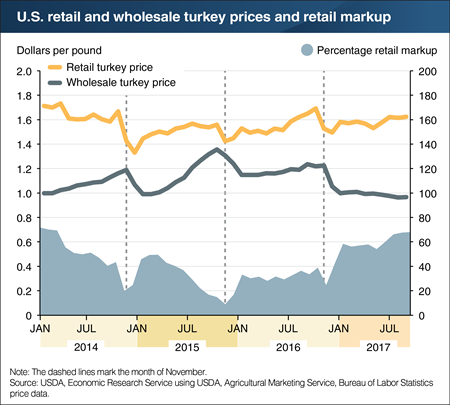 Typical Thanksgiving meals are filled with many iconic foods like pumpkin pie and stuffing, and turkey is usually the centerpiece. This year, wholesale turkey prices have been sharply lower than in years past. Do low wholesale prices indicate lower retail prices? Not always. While wholesale and retail price movements are strongly correlated on a yearly basis, seasonal factors can disrupt this correlation. During the Thanksgiving holiday season, retail turkey prices are commonly near annual low points. The percentage markup from wholesale to retail price also declines to a low point during that period. The average markup between January 2014 and September 2017 was 42 percent. The November average markup over the same period was just 13 percent. The data indicate that competition between retailers for Thanksgiving business may lead to lower costs for consumers even as wholesale prices rise. Because wholesale prices this year have remained low late into the year, retail prices may fall below previous years or the trend of low retail markups in November may be disrupted. This chart appears in the Amber Waves article "Low Wholesale Turkey Prices in 2017 Should Translate to Lower Costs for Consumers This Thanksgiving," released in November 2017.