Thanksgiving is one of the most popular holidays in America and turkeys are the undisputed centerpiece of the traditional feast. Over 240 million turkeys were raised in 2016, and it is estimated that nearly 50 million of those birds are consumed on Thanksgiving Day. Prices for whole turkeys vary from year to year, and movements in wholesale prices at the farm level do not always translate into price movements at the retail level. Fortunately for consumers, Thanksgiving season often marks the low point for the retail mark up for whole turkeys. This year, low wholesale prices are likely a good sign for price-conscious consumers.

Wholesale whole turkey prices fell in 2017, relative to 2016, and have remained below historical averages since January, indicating that demand may not be keeping up with current supply levels. Typically, wholesale turkey prices have a seasonal trend, with prices climbing from their bottom level in the beginning of the year to a peak near Thanksgiving. This year, whole turkey prices have not increased as in years past and have dipped further throughout the summer. The average price for a whole frozen hen in August was just under 97 cents per pound, 3 percent below January and 19 percent below August 2016. As of the fourth week of September, prices had fallen farther to 96 cents. The last time wholesale prices were below $1 per pound as late as September was in 2010.

Do low wholesale prices indicate lower retail prices? Not always. Research in the October Livestock, Dairy, and Poultry Outlook newsletter looked at movements in wholesale and retail turkey prices leading up to the Thanksgiving holiday. While wholesale and retail price movements are strongly correlated on a yearly basis, seasonal factors can disrupt this correlation. During the Thanksgiving holiday season, retail turkey prices are commonly near annual low points. The percentage markup from wholesale to retail price also declines to a low point during that period. The average markup between January 2014 and September 2017 was 42 percent. The November average markup over the same period was just 13 percent. The data indicate that competition between retailers for Thanksgiving business may lead to lower costs for consumers even as wholesale prices rise. Because wholesale prices have remained low late into the year, retail prices may fall below previous years or the trend of low retail markups in November may be disrupted. 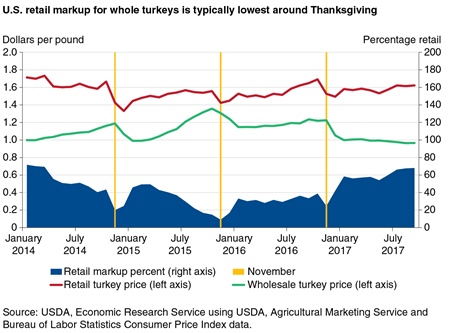