Driven by growing per capita consumption in West Africa, Sub-Saharan Africa is projected to be a major rice consumer 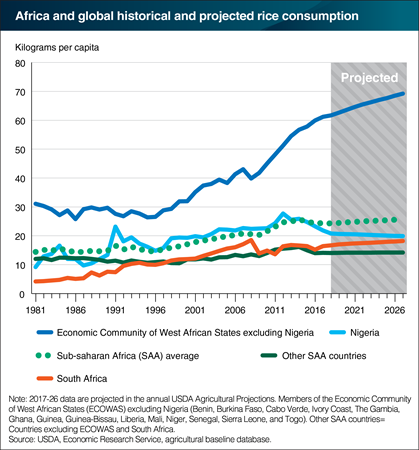 Sub-Saharan Africa (SSA) has undergone economic, social, and demographic transformations over the past 10-15 years. Among the poorest regions in the world, it faces major political and economic challenges and low food security. However, it has a young, fast-growing population and prospects for economic growth. Expanding urbanization and a rising middle class with higher incomes are driving changes in consumption patterns and preferences away from traditional staples and toward rice and other commodities. Rice consumption has expanded in the diets of many SSA consumers at the expense of sorghum, millet, and roots and tubers. On a per-capita basis, West African nations, collectively known as the Economic Community of West African States (ECOWAS) have seen the largest increases in rice consumption. Excluding Nigeria, which reduced its rice consumption because of declining oil revenue and limited foreign exchange reserves, the remaining ECOWAS countries recently surpassed the global per capita rice consumption average. These countries are projected to increase their rice consumption further to nearly 70 kilograms per person by 2026. If the projections are realized, SSA as a whole has the potential to become the world’s leading rice importer. This chart appears in the October Amber Waves feature, "Sub-Saharan Africa Is Projected to Be the Leader in Global Rice Imports."