The Paris futures market has gained influence in wheat price discovery, but Chicago remains the leader 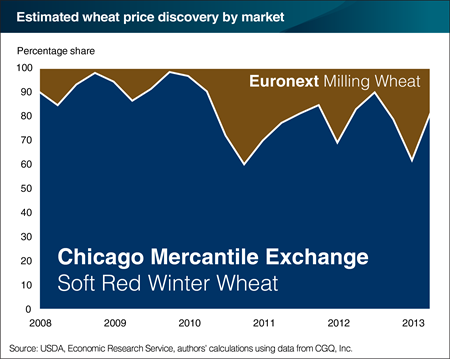 Until recently, the United States led the world in the pricing and trade of wheat. But over time, a substantial share of world wheat exports shifted to Russia and Ukraine (collectively, the Black Sea region) and the European Union. At the same time, U.S. wheat futures (contracts for the purchase/sale of wheat at a given price on a future date) prices are being supplanted by new price benchmarks that more closely track supply and demand conditions in the Black Sea region and the European Union. While the Chicago Mercantile Exchange Soft Red Winter Wheat futures contract is the most active wheat futures market in the world, futures trading volume has grown substantially for the Euronext Milling Wheat contract traded in Paris. Rising volume indicates a market may be more important for price discovery, the process by which markets determine the value of wheat through trades between willing buyers and sellers. A new study by economists at ERS and Montana State University estimated the relative proportion of price discovery in the Chicago and Paris futures markets between 2008 and 2013. Findings suggest that while U.S. futures markets remain dominant in wheat price discovery, the Paris futures market has gained influence since 2010, moving from a 9-percent share of price discovery to nearly 25 percent. This chart appears in the October Amber Waves article, "Wheat Price Discovery Remains Concentrated in the United States, but Shifting to Europe."