Wheat Price Discovery Remains Concentrated in the United States, but Shifting to Europe

At the same time, U.S. wheat futures (contracts for the purchase/sale of wheat at a given price on a future date) prices are being supplanted by new price benchmarks that more closely track supply and demand conditions in the Black Sea region and the European Union. While the Chicago Mercantile Exchange Soft Red Winter Wheat futures contract is the most active wheat futures market in the world, futures trading volume has grown substantially for the Euronext Milling Wheat contract traded in Paris. Rising volume indicates a market may be more important for price discovery, the process by which markets determine the value of wheat through trades between willing buyers and sellers.

A new study by economists at ERS and Montana State University estimates the relative proportion of price discovery in the Chicago and Paris futures markets between 2008 and 2013. Using high-frequency price data, the authors identify the market where adjustment in the common value of all wheat first occurs. For example, supply shocks caused by severe weather events occurring in the Black Sea Region and the European Union are increasingly important to the world supply and demand outlook for wheat. Traders who prefer the Paris market—for reasons including hedging effectiveness, trading hours, or the currency in which trades are denominated—may possess better information about these events, and their trading activity may cause prices in Paris to move before prices in Chicago.

The study finds U.S. futures markets remain dominant in wheat price discovery, although the Paris market has grown more important since 2010, when major supply shocks in the Black Sea region culminated in the imposition by Russia of a wheat export ban. Prior to August 2010, 91 percent of information about the common value of wheat was first revealed in Chicago futures prices. After August 2010, this share dropped to 75 percent. If this trend continues, wheat price movement in Paris will increasingly lead to price changes elsewhere. Instead of Paris wheat futures complementing U.S. markets, establishing the price differential for wheat delivered in Europe relative to the United States, the Paris market may also substitute for U.S. markets in establishing the world benchmark value of wheat. 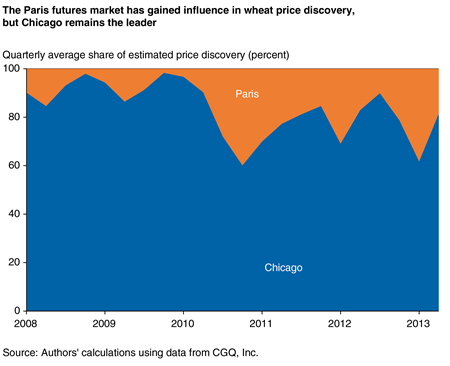