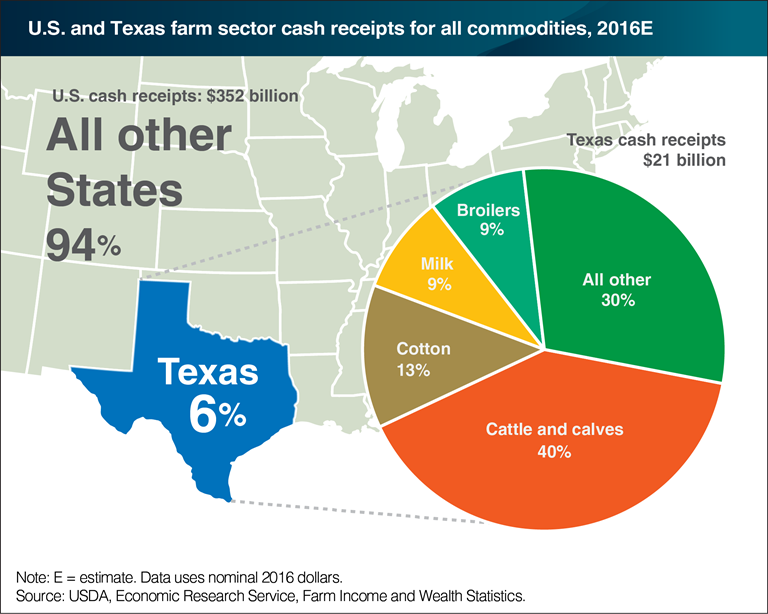 Each August, as part of the its Farm Income data product, ERS produces estimates of the prior year’s cash receipts—the cash income the farm sector receives from agricultural commodity sales. This data product includes State-level estimates, which can help offer background information about States subject to unexpected changes that affect the agricultural sector, such as the recent hurricane that struck Texas. In 2016, U.S. cash receipts for all commodities totaled $352 billion. Texas contributed about 6 percent ($21 billion) of that total, behind only California and Iowa. Cattle and calves accounted for 40 percent ($8 billion) of cash receipts in Texas, compared to 13 percent nationwide. Only Nebraska had higher cash receipts for cattle and calves in 2016. Texas led the country in cash receipts from cotton at almost $3 billion (13 percent of the State’s receipts), accounting for 46 percent of the U.S. total for cotton. Milk and broilers each accounted for 9 percent of cash receipts in Texas. The State ranked sixth in both milk and broiler cash receipts nationwide. This chart uses data from the ERS U.S. and State-Level Farm Income and Wealth Statistics data product, updated August 2017.