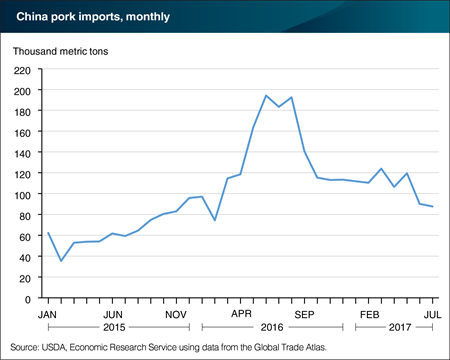 China produces roughly half of the world’s pork, generating 55 billion pounds per year since 2013. But, over the past decade it has nevertheless become a leading importer of the meat. Domestic pork production contracted in 2015 and 2016 because of lower pig supplies. That period followed 7 years of growth that drove prices below profitable levels. Imports soared during 2016, as shrinking Chinese pork supplies helped push the country’s pork prices to record levels. But, the most recent data show that imports have fallen about 52 percent from a year ago, reflecting an ongoing recovery in Chinese domestic production. Over the past year, the country reduced its pork imports from all major pork exporting countries, including the United States (-38.0 percent), Canada (-51.6 percent), the E.U. (-56.3 percent), and Brazil (-60.6 percent). In addition, a dozen or more feed and livestock companies have announced aggressive expansion plans within China. With higher domestic hog and pork production, supplies in China appear more than adequate, as the prices for feeder pigs, pork, and live hogs are all below the levels of a year ago. The chart appears in the September Livestock, Dairy, and Poultry Outlook report.