Obesity of parents is associated with obesity of children 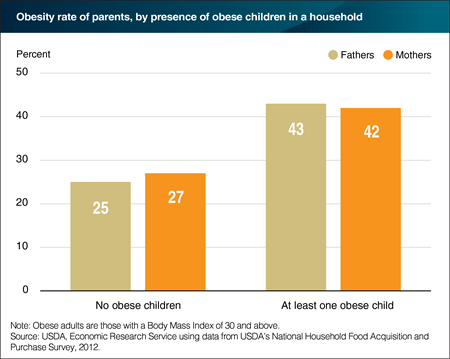 According to the U.S. Centers for Disease Control and Prevention, about 1 out of 5 children and adolescents (ages 2-19) are obese in the United States. A recent ERS study used data from USDA’s National Household Food Acquisition and Purchase Survey (FoodAPS) to look at how households with at least one obese child differ from households without an obese child. The study found that the parents of obese children were more likely to be unmarried, less educated, and have lower incomes. The researchers also found a strong association between parents’ and children’s obesity. About a quarter of mothers (27 percent) and fathers (25 percent) with no obese children were obese. In contrast, 42 percent of mothers and 43 percent of fathers with at least one obese child were obese. This strong association suggests that shared environments and genetic compositions likely play an important role in childhood obesity. The data for this chart are drawn from the ERS report, The Differences in Characteristics Among Households With and Without Obese Children: Findings From USDA’s FoodAPS, released on September 13, 2017.