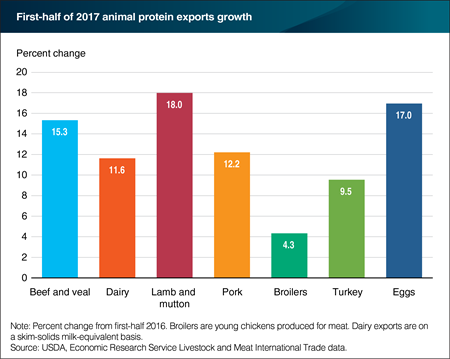 The latest available U.S. trade data show that first-half of 2017 animal products exports are higher for all major commodities for 2016. An increase in global demand and a decline in the U.S. dollar likely contributed to favorable conditions for exports. According to the U.S. Federal Reserve’s Price-adjusted Broad Dollar Index, the value of the U.S. dollar fell 5.9 percent since December 2016. All of the products, except for eggs, are building on positive annual growth in 2016 relative to 2015. In the case of eggs, the 2015 U.S. highly pathogenic avian influenza (HPAI) outbreak resulted in a sustained egg-laying flock rebuilding process that limited production and trade. With the exception of U.S. beef and veal exports, the largest share of which went to Japan, Mexico accounted for the largest share of U.S. animal product exports. Mexico’s share so far in 2017 ranges from a low of 15 percent of U.S. beef and veal exports to a high of 64 percent of all U.S. turkey exports. This chart appears in the ERS Livestock, Dairy, and Poultry Outlook newsletter, released in August 2017.