By multiple measures, global food security has improved significantly since 1990 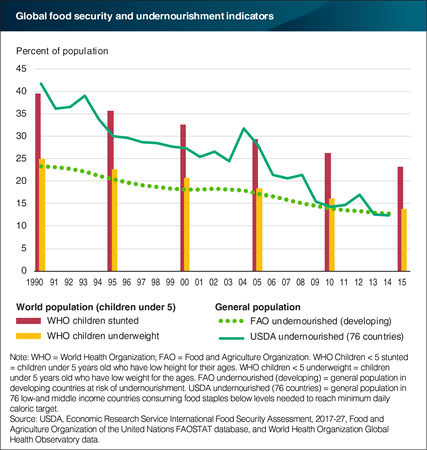 The United States made commitments to end global food insecurity by 2030 as part of the 2015 Global Sustainable Development goals. In 2016, the country enacted the Global Food Security Act, which seeks to reduce food insecurity and poverty through agricultural-led growth, increased resilience, and a broad commitment to improved nutrition. Because initiatives to address international food insecurity are evidence driven, advances in measuring food security remain critical to monitoring and evaluating progress. Assessments using metrics that primarily capture food availability and access dimensions confirm significant improvements in global food security over the past few decades. According to the Food and Agriculture Organization of the United Nations, the prevalence of undernourished people in the developing world declined from 23.3 percent to 12.9 percent between 1990 and 2015. The ERS International Food Security Assessment, 2017-27, finds that the prevalence of undernourishment has more than halved between 1990 and 2015 for the 76 low- and middle-income countries that USDA regularly tracks. This chart appears in the ERS report "Progress and Challenges in Global Food Security," released in July 2017.