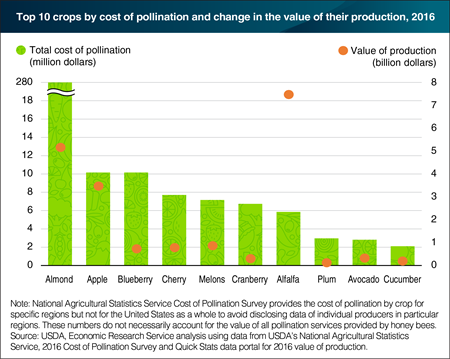 Farmers growing crops that depend on pollination can rely on wild pollinators in the area or pay beekeepers to provide honeybees or other managed bees, such as the blue orchard bee. In 2016, U.S. farmers paid $354 million for pollination services. Producers of almonds alone accounted for 80 percent of that amount—over $280 million. By comparison, producers of apples and blueberries paid about $10 million each. Pollination services helped support the production of these crops—which, in 2016, had a total production value of about $5.2 billion for almonds, $3.5 billion for apples, and $720 million for blueberries. Between 2007 and 2016, the production value of almonds grew by 85 percent in real terms, while the production value of both apples and blueberries grew by about 15 percent. Over the same period, the number of honey-producing colonies grew by 14 percent. This chart uses data found in the ERS report Land Use, Land Cover, and Pollinator Health: A Review and Trend Analysis, released June 2017.