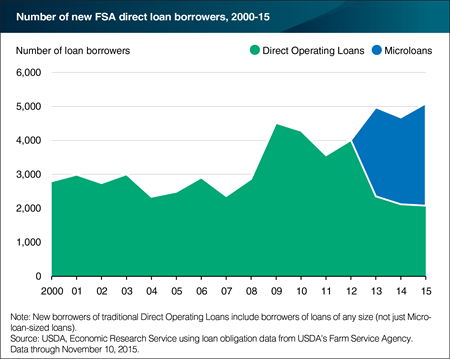 The USDA Farm Service Agency (FSA) provides loans to farmers through a number of programs. Direct Operating Microloans are designed to be more convenient and accessible than FSA’s traditional Direct Operating Loans (DOLs) for groups such as beginning farmers, women, and veterans. The number of new FSA direct loan borrowers—those who had not previously received an FSA direct loan, such as a traditional DOL or Microloan—increased substantially in 2009. During that time more farmers turned to FSA, as commercial sources of credit tightened during the Great Recession. Since then, the number of new FSA direct loan borrowers increased overall, though the number receiving traditional DOLs fell in 2013, when the Microloan program began. This suggests that the Microloan program may have attracted new borrowers that otherwise might have applied for traditional DOLs. At the time of receiving their first Microloan, 8,182 borrowers (71 percent) were new to FSA direct loans. Microloans are much smaller than traditional DOLs, with a maximum loan limit of $50,000 compared to $300,000. A version of this chart appears in the ERS report USDA Microloans for Farmers: Participation Patterns and Effects of Outreach, released December 2016.