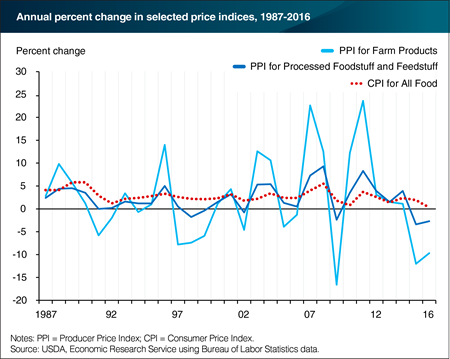 Favorable weather conditions as well as droughts and floods can lead to changes in production levels of farm commodities and, in turn, swings in their prices. Volatility in farm commodity prices—measured by the Producer Price Index (PPI) for Farm Products—and in intermediate foods—measured by the PPI for Processed Foodstuff and Feedstuff—is often greater than price volatility in grocery stores and restaurants. Intermediate foods, such as vegetable oils and refined sugar, are used to produce final foods like cookies and bread. Prices at each stage generally move in the same direction, but the magnitude of the price changes varies. For instance, in 2016 the Farm Products PPI declined by 9.7 percent, the Processed Foodstuff and Feedstuff PPI fell by 2.7 percent, while the Consumer Price Index (CPI) for All Food (foods purchased in stores and eating places) rose, slightly, by 0.3 percent. Price fluctuations for intermediate foods and final foods are muted relative to that of farm products, since foods at later stages of production include less volatile costs for processing, transportation, packaging, and other wholesale and retail overhead costs. According to ERS’s Food Dollar Series, farm and agribusiness costs only represented 10.8 cents of every dollar spent on domestically-produced food in 2015. This chart is from ERS’s Food Price Outlook data product, updated July 3, 2017.