After years of growth, U.S. farm real estate values have stalled since 2014 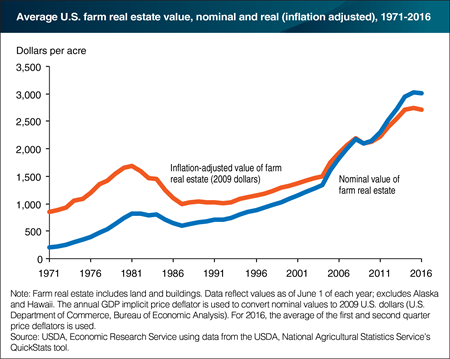 In recent years, farm real estate (including farmland and buildings) has accounted for about 80 percent of the value of U.S. farm assets—amounting to about $2.4 trillion in 2015. Strong farm earnings and historically low interest rates have supported the increase in farmland values since 2009. Since 2014, farm real estate values in many regions have leveled off; and, in 2016, the national average per-acre value declined slightly. This is partly a response to the recent declines in farm income, which may temper expectations of future farm earning potential. In addition, the 2016 USDA 10-year commodity outlooks suggest that the prices of major commodities will all stabilize at, or grow modestly from, their current price levels—which are significantly lower than those in 2011. Expectations of interest rate increases, which have been noted in some U.S. farm regions, also put downward pressure on land values. Given that farm real estate makes up such a significant portion of the balance sheet of U.S. farms, changes in its value can affect the financial well-being of individual farms and the farm sector. Over 60 percent of U.S. farmland was owner-operated in 2014; for these owners, increases in real estate values make it easier to obtain credit and service debt. For the farmers who rent the remaining 39 percent of farmland, higher real estate values can lead to higher rent expenses. This chart appears in the ERS topic page for Farmland Value, updated April 2017.