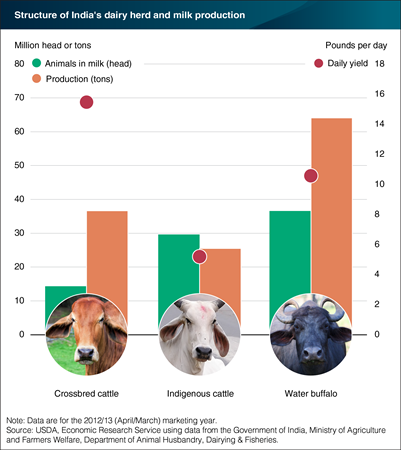 India is the world’s largest producer and consumer of milk and has the world’s largest dairy herd. The country’s milk production has been expanding at about 4.2 percent annually since 2000, matching growth in demand as higher incomes spur more fluid milk and dairy product consumption. About half of India’s milk production is from water buffalo, and the other half is from cattle, which includes indigenous breeds and crossbred animals. Crossbred cattle are mixes of indigenous and imported exotic dairy breeds, such as Holstein-Friesen, Jersey, and Brown Swiss. The indigenous component of the cattle milking herd has relatively low milk production, or yield, per animal and is shrinking, while the higher yielding crossbred component is now the fastest growing portion of the total herd. The water buffalo herd, with per animal milk yields in between those of the indigenous and crossbred herds, continues to expand, although recent data suggest that the pace may be slowing. This chart appears in the ERS Amber Waves article, "Changes in Herd Composition a Key to Indian Dairy Production," released in June 2017.