Changes in Herd Composition a Key to Indian Dairy Production

by Maurice Landes and Jerry Cessna

India is the world’s largest producer and consumer of milk and has the world’s largest dairy herd. The country’s milk production has been expanding at about 4.2 percent annually since 2000, matching growth in demand as higher incomes spur more fluid milk and dairy product consumption. One of the keys to recent and future production growth is the changing composition of India’s uniquely structured dairy herd.

About half of India’s milk production is from water buffalo, and the other half is from cattle, which includes indigenous breeds and crossbred animals. Crossbred cattle are mixes of indigenous and imported exotic dairy breeds, such as Holstein-Friesen, Jersey, and Brown Swiss. The indigenous component of the cattle milking herd has relatively low milk production, or yield, per animal and is shrinking, while the higher yielding crossbred component is now the fastest growing portion of the total herd. The water buffalo herd, with per animal milk yields in between those of the indigenous and crossbred herds, continues to expand, although recent data suggest that the pace may be slowing.

Future milk production growth likely depends on the continued expansion of the size and productivity of the crossbred cattle and water buffalo milking herds. Even in the case of India’s relatively high-yielding crossbred herd, the average annual yield of about 6,687 pounds is only about 26 percent of the U.S. annual average yield of 22,597 pounds per cow; India’s data are based on marketing years and U.S. data are based on calendar years. While pure exotic breeds are not well suited for India’s climate and disease conditions, crossbred cattle carry the higher milk-yielding traits of the exotic breeds with the climatic adaptation and disease-resistance traits of indigenous breeds. The fast growth in the crossbred herd is consistent with its relatively high milk yields, but crossbred animals require higher quality feeds and more intensive management than indigenous breeds.

India’s water buffalo combine the traits of high milk yield relative to most indigenous cattle (but not crossbred cattle), a high level of adaptation to climatic and disease conditions, and the ability to convert many of the available low-quality indigenous grasses and feeds into milk. Buffalo milk is also commonly preferred by both Indian consumers and commercial processors because of its unique characteristics, including higher skim-milk solids (such as protein and lactose) than cattle or goat milk, and its particularly high butterfat content—typically 6-8 percent compared with 3-4 percent for cattle milk. 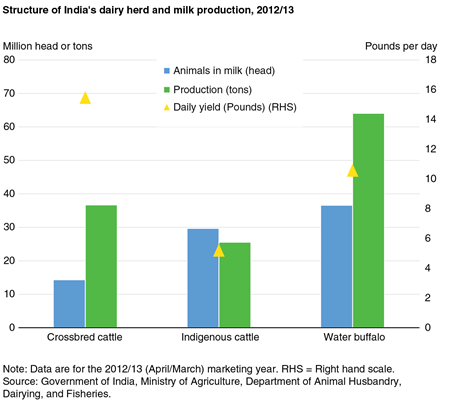 Productivity gains are dependent on improved management, better quality feeding practices, more selective breeding, and enhanced genetics for both crossbred cattle and water buffalo. Increasing the scale of dairy operations, which traditionally consist of only one to two milk animals per household, is likely to be an important factor in achieving improved management. India’s strict laws against cattle slaughter in many States may restrict the profitability of cattle-based dairy operations because of the inability to cull unproductive animals. In contrast, water buffalo slaughter and meat consumption are legal throughout the country, and India is a major exporter of water buffalo meat. These factors should support the profitability and growth of water buffalo-based dairy operations.