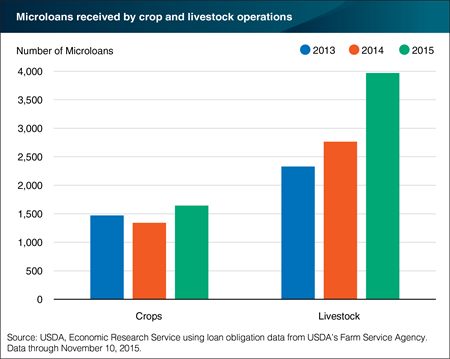 In January 2013, USDA’s Farm Service Agency (FSA) launched the Direct Farm Operating Microloan program to better serve the credit needs of small farms, beginning farmers, farmers from socially disadvantaged groups (women and minorities), and veterans. FSA issued over 13,800 Microloans as of mid-November 2015, which varied by the type of operation. The number of Microloans received by crop farmers remained fairly stable, while those received by livestock farmers increased each year—from about 2,300 in 2013 to nearly 4,000 in 2015. Crops include grain and oilseeds, vegetables, and fruits; livestock include beef cattle, dairy, and poultry. Beef cattle operations alone received more than half of all Microloans. Grain and oilseed farms, the next largest category, received about 15 percent. Beef cattle operations accounted for about a third of all operations in 2014, a much larger share than any other production category. They also tend to be relatively small, so small loans like Microloans (up to $50,000 each) might fulfill the financing needs of more beef cattle operations relative to other commodity specializations. This chart appears in the ERS report USDA Microloans for Farmers: Participation Patterns and Effects of Outreach, released December 2016.