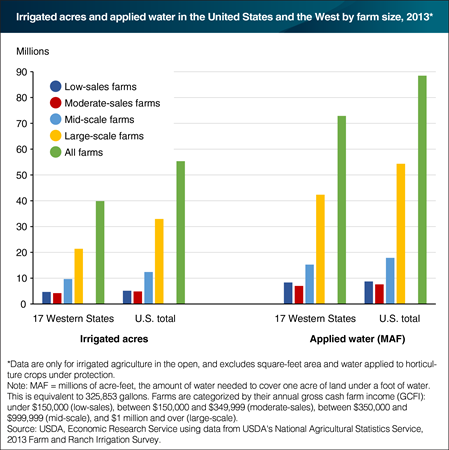 The irrigation of agricultural land varies across farm sizes. Most irrigated farms in 2013 (about two-thirds) were low-sales operations with under $150,000 in annual gross cash farm income (GCFI). Low-sales farms that irrigate average less than 50 irrigated crop acres per farm—compared to 1,200 acres for large-scale irrigated farms with $1 million or more in GCFI. However, large-scale farms accounted for over half of irrigated acres, 60 percent of applied water, and 79 percent of the value of irrigated farm production. Large-scale farms dominate these characteristics because their size allows them to spread costs over many more acres (compared to other farms). For example, irrigation pumping costs for large-scale farms in the West generally average about half that for low-sales farms. In 2013, U.S. farms irrigated about 55.4 million acres and applied more than 88.5 million acre-feet (MAF) of water, equivalent to about 28.8 trillion gallons. The irrigation of cropland—which included crops like corn, wheat, and soybeans—accounted for nearly all the water use (98 percent). This chart appears in the June 2017 Amber Waves data feature, "Understanding Irrigated Agriculture."