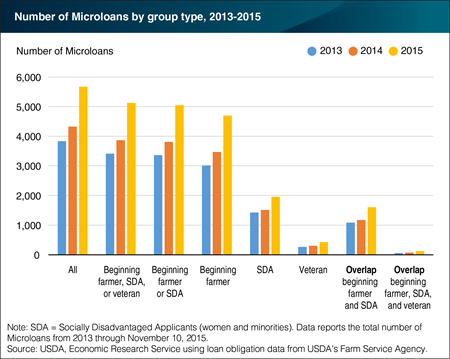 In January 2013, USDA’s Farm Service Agency (FSA) launched the Direct Farm Operating Microloan program to better serve the credit needs of small farms, beginning farmers, farmers from socially disadvantaged groups (women and minorities), and veterans. These loans (up to $50,000) are designed to be more convenient and accessible to groups not traditionally served through FSA’s credit programs. Relative to FSA’s traditional Direct Operating Loans, for example, the Microloan program has a shorter application and more relaxed requirements for farm management experience, production history, and collateral. FSA has issued over 13,800 Microloans as of mid-November 2015. The number of loans increased 13 percent from 2013 to 2014 and 31 percent from 2014 to 2015. Farmers belonging to one or more of the program’s targeted groups—beginning farmers, SDA borrowers, and veterans—received nearly 90 percent of Microloans issued. Overall, beginning farmers received the most Microloans (81 percent) out of any group. This chart appears in the March 2016 Amber Waves finding, "Nearly 14,000 USDA Microloans Issued Between 2013 and 2015."