In January 2013, USDA’s Farm Service Agency (FSA) launched the Direct Farm Operating Microloan program to better serve the credit needs of small farms, beginning farmers, socially disadvantaged applicants (SDA, consisting of women and minorities), and veterans. These Microloans, which have a $50,000 limit, are designed to be more convenient and accessible to new and nontraditional farmers than FSA’s traditional Direct Operating Loans (DOLs), which have a maximum loan size of $300,000.

Many farmers who would otherwise be interested in a traditional DOL might forego applying because of the lengthy application process or requirements that can be more difficult for less established farmers to meet. The Microloan program is designed to lower these barriers. Microloans, for example, have relaxed requirements for farm management experience, production history, and collateral.

Several patterns appear when comparing the distribution of Microloans across groups of borrowers. Farmers belonging to one or more of the program’s targeted groups—beginning farmers, SDA borrowers, and veterans—received the most Microloans overall, almost 90 percent between 2013 and 2015. By comparison, less than 60 percent of U.S. farms had at least one operator from any of those groups, according to the 2012 Census of Agriculture. This shows that the Microloans program targeted these groups beyond their overall distribution across U.S. farms. 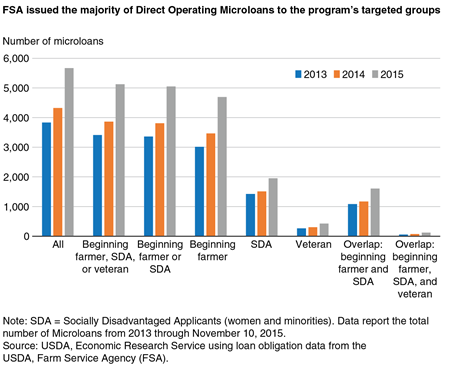