Dedicating land to energy crops (like switchgrass) would shift land use 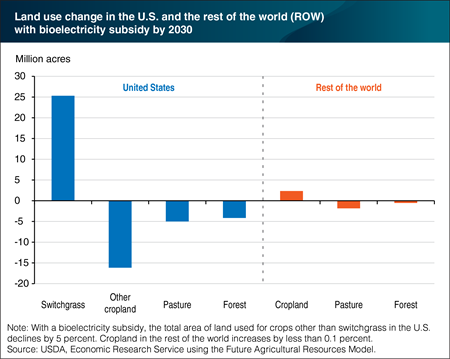 Crops dedicated for use in energy production, such as switchgrass, are potential renewable sources for liquid fuels or bioelectricity. Switchgrass is a perennial grass native to most of North America that grows well on rain-fed marginal land. However, markets do not presently exist for large-scale use of this energy resource. An ERS study simulated the agricultural land use impacts of growing enough switchgrass to generate 250 billion kilowatt-hours of electricity annually with a bioelectricity subsidy by 2030—approximately the amount generated by U.S. hydropower today. The introduction of dedicated energy crops on a large scale could affect other agricultural land uses, the prices of other crops, and trade in agricultural products. For example, the simulation predicted that land converted to switchgrass would come mostly from land used for crops like hay and corn. Pasture and forest land use would be affected at about the same level. An increase in U.S. land area for switchgrass would also lead to smaller changes in land use abroad due to agricultural product trade. This chart appears in the April 2017 Amber Waves finding, "Dedicating Agricultural Land to Energy Crops Would Shift Land Use."