Dedicating Agricultural Land to Energy Crops Would Shift Land Use

by Ron Sands and Scott Malcolm

Crops dedicated for use in energy production, such as switchgrass, are potential renewable sources for liquid fuels or bioelectricity. Switchgrass is a perennial grass native to most of North America and grows well on rain-fed marginal land. However, demand for switchgrass is low at the current cost of growing and converting it into useful energy, so markets do not presently exist for large-scale use of this resource.

Bioenergy expands the options for renewable energy, along with solar and wind, derived from dedicated (nonfood) energy sources. A recent ERS study analyzed three scenarios that would make switchgrass competitive with other energy sources by 2030: a subsidy for electricity generation using switchgrass, a national Renewable Portfolio Standard (RPS), and a national cap-and-trade policy to limit carbon dioxide emissions. Each scenario would provide 250 billion kilowatt-hours per year of electricity using switchgrass—approximately the amount generated by U.S. hydropower today.

The introduction of dedicated energy crops on a large scale could affect other agricultural land uses, the prices of other crops, and trade in agricultural products. Energy crops would be grown in regions where they have a comparative yield advantage relative to other crops. The study’s results suggest that switchgrass as a share of total cropland in 2030 would be highest in Appalachia, the Southeast, and the Northern Plains.

An increase in U.S. land area for switchgrass would lead to changes in land use not only within the country, but also abroad due to agricultural product trade. Total land for crops, pasture, and forest would remain constant in each world region, but land allocation may change. An increase in land for an energy crop is offset by decreases in land for other uses.

As the chart shows, land converted to switchgrass would come mostly from land used for other crops. Pasture and forest land use would be affected at about the same level. The changes in land use in the rest of the world are small relative to the changes in the United States.

Land-use change also differs somewhat for the other scenarios examined. For example, forest area in the United States would expand by 2.5 million acres in the cap-and-trade scenario. Other factors that can affect land use include yield changes for food and energy crops and competition from other renewable sources—such as wind or solar power. 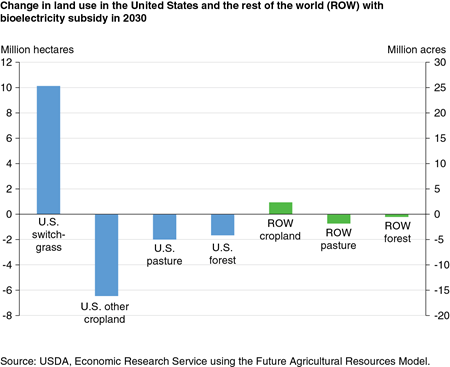