Mexico is the leading destination for U.S. dairy products 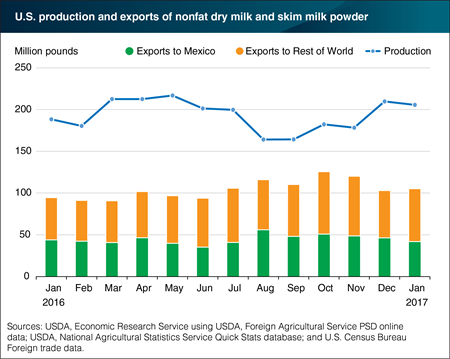 Mexico has consistently been the leading export destination for U.S. dairy products, with the combination of nonfat dry milk (NDM) and skim milk powder (SMP) as the top export product. (NDM and SMP are two very similar products grouped together in export data.) In 2016, 54 percent of NDM/SMP produced in the United States was exported, and 43 percent of these exports went to Mexico. However, there is a great deal of uncertainty concerning the future of exports to Mexico due to a strong dollar and possible changes in trade policy. The United States accounted for 94 percent of Mexico’s imports of NDM/SMP in 2016. Other sources included New Zealand, Spain, Canada, and Germany. If Mexico were to reduce imports from the United States, those countries would be in a better position to increase their share of trade. This chart appears in the ERS Livestock, Dairy, and Poultry Outlook report released in March 2017.