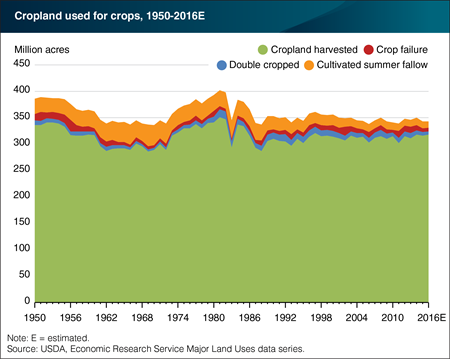 The ERS Major Land Uses (MLU) series estimates land in various uses, including the acres devoted to crop production in a given year. These acres, collectively referred to as “cropland used for crops,” include acres of cropland harvested, acres on which crops failed, and cultivated summer fallow. At 318 million acres, cropland harvested in 2016 is estimated to have increased by 2 million acres from the previous year—returning to levels in 2014 and matching the highest cropland harvested area since 1997 (321 million acres). The area that was double cropped (two or more crops harvested) declined by 1 million acres, while land that experienced crop failure held constant at 7 million acres in 2016—remaining well below its 20-year average of 10 million acres. Cultivated summer fallow, which primarily occurs as part of wheat rotations in the semiarid West, continued its long-term decline and reached its lowest level (12 million acres) since the start of the MLU series. The larger historical fluctuations seen in cropland used for crops are largely attributable to Federal cropland acreage reduction programs, such as the Conservation Reserve Program (CRP). Initiated in 1985, the CRP pays farmers to keep idle environmentally sensitive land that could otherwise be used in crop production. This chart uses historical data from the ERS MLU series, recently updated to include 2016 estimates.