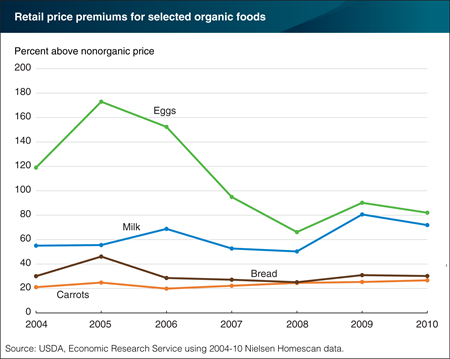 A recent ERS study estimated price premiums in grocery stores for 17 commonly purchased organic foods relative to their nonorganic counterparts from 2004 to 2010. Price premiums for most of the organic products studied did not steadily increase or decrease during the 7-year period, but fluctuated. Premiums for organic bread ranged from 25 to 45 percent above the nonorganic price, and premiums for organic milk ranged from 50 to 80 percent. The wide fluctuations in the price premium for organic eggs—66 to 173 percent—may be a result of the large retail price swings common for nonorganic eggs. Organic carrots, on the other hand, had a narrower range of premiums. Organic carrots were priced between 20 and 27 percent higher than nonorganic carrots during 2004 to 2010. This chart appears in “Investigating Retail Price Premiums for Organic Foods” in the May 2016 issue of ERS’s Amber Waves magazine.