U.S. dairy exports, by any measure, have increased significantly in recent years 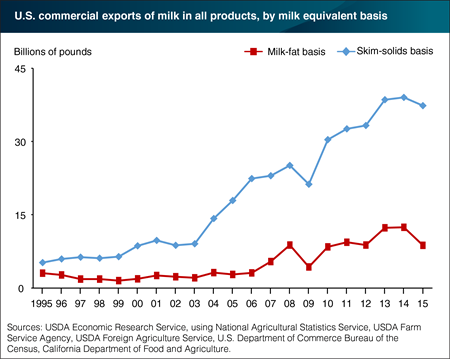 Dairy manufacturers separate and reassemble milk components to produce a variety of products. To analyze aggregate domestic and foreign demand for U.S. milk products, the products are often converted to a common milk equivalent. Two common measures are milk-fat basis and skim-solids basis. Depending on the product, the two measures may diverge significantly. Butter is very high in milk-fat and low in skim-solids, for example, while non-fat dry milk is the opposite. From 1995 to 2003, dairy product exports averaged 2.2 billion pounds per year on a milk-fat basis and 1.4 percent of total milk production. Since 2003, milk-fat basis exports have grown, reaching 12.4 billion pounds (6.0 percent of milk production) in 2014, but then falling to 8.8 billion pounds (4.2 percent) in 2015. Skim-solids basis exports have grown more, increasing from 5.2 billion pounds (3.4 percent of milk production) in 1995 to 39.0 billion pounds (18.9 percent) in 2014, before falling to 37.3 billion pounds (17.9 percent) in 2015. While both metrics have grown significantly, the larger increase in skim-solids basis exports indicates that products like non-fat dry milk, whey, and lactose have been especially popular on the export market. This chart appears in the ERS Growth of U.S. Dairy Exports report published in November 2016.