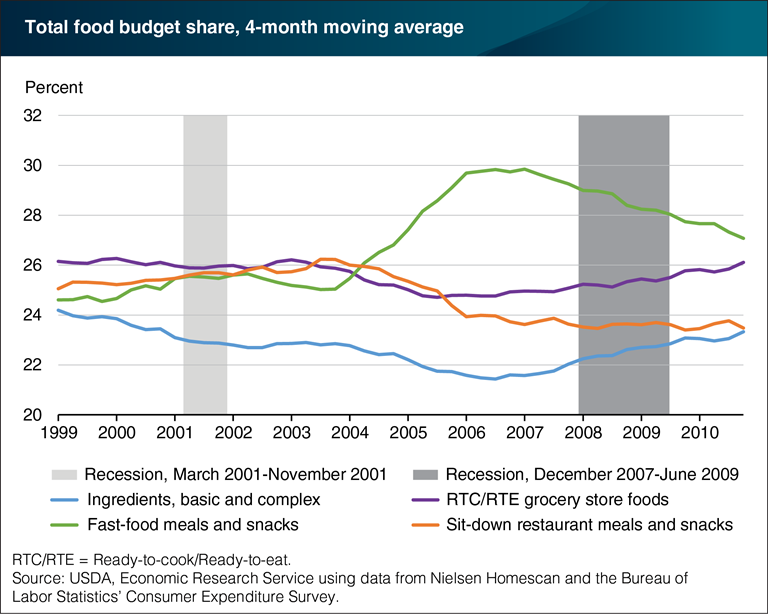 A recent ERS analysis found that between 1999 and 2006, the share of the average household food budget allocated to basic and complex ingredients fell steadily from around 24.7 to 20.8 percent, but then began to climb reaching 24.2 percent in 2010. Basic ingredients, such as milk and fresh meats, and complex ingredients, such as mayonnaise and bread, are grocery store foods used to prepare a meal or snack. The food budget share—defined as total expenditures at grocery stores and eating-out places—spent on ready-to-cook and ready-to-eat grocery store foods followed a somewhat similar, but muted, pattern. The upturn in food budget share devoted to ingredients and ready to eat/cook grocery foods began almost a year before the 2007-09 recession and its aftermath—a time when many consumers cut back on eating out, especially fast food meals and snacks. The share of the total food budget spent in fast-food outlets where customers order and pay at a counter grew until 2007 to 30.6 percent, then declined to 25.7 percent in 2010. This chart appears in “Purchases of Foods by Convenience Type Driven by Prices, Income, and Advertising” in the November 2016 issue of ERS’s Amber Waves magazine.