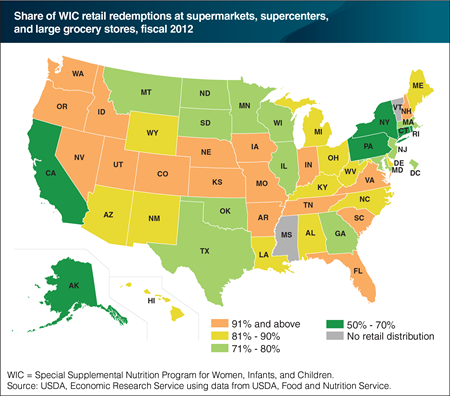 In fiscal 2015, 8 million women, infants, and children under age 5 participated in USDA’s Special Supplemental Nutrition Program for Women, Infants, and Children (WIC). Participants in 48 States and the District of Columbia received paper vouchers or electronic benefit cards redeemable at authorized retail stores for a set of nutrient-rich supplemental foods. WIC participants in Mississippi pick up their WIC foods at distribution centers, and prior to 2016, Vermont participants had their WIC foods delivered to their homes. Using two USDA administrative data sources, a recent ERS report found that over three-fourths of the WIC benefits redeemed in stores in fiscal 2012 were redeemed at large stores (supercenters, supermarkets, and large grocery stores), ranging from 50 percent in California to 99 percent in Nevada. Large stores accounted for 91 percent or more of WIC retail redemptions in 17 States and 81-90 percent in 13 States. Other types of stores, such as medium and small grocery stores and WIC-only stores, account for a sizable share of WIC redemptions in some States. This chart appears in “States Differ in the Distribution of WIC Benefits Across Types of Retail Food Stores” in the August 2016 issue of ERS’s Amber Waves magazine.