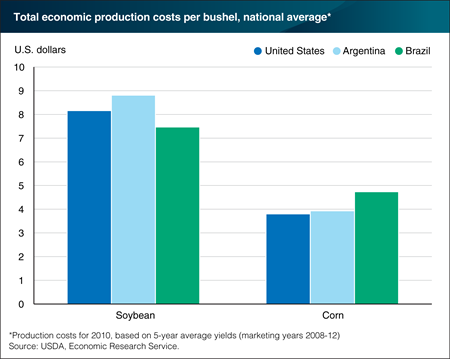 The cost of producing agricultural commodities varies across countries and regions due to many factors, including the quality of resources, climatic conditions, and the cost and availability of necessary inputs. Differences in cost of production help to determine a country’s export competitiveness in global markets, with low-cost producers usually capturing a larger share of global exports. Corn and soybeans are among the most important agricultural commodities traded in global markets, and the United States, Brazil and Argentina are the leading exporters, accounting for a combined 88 percent of world soybean exports and 73 percent of world corn exports between 2008 and 2012. Based on data for 2010 and 5-year average yields, the cost of producing soybeans in Argentina average $8.81 per bushel, compared to $7.47 in Brazil and just over $8.00 in the United States. For corn, Brazil had the highest cost of production at $4.74 per bushel, compared to $3.93 for Argentina and $3.80 in the United States. This chart is from the ERS report, Corn and Soybean Production Costs and Export Competitiveness in Argentina, Brazil and the United States, released on June 22, 2016.