India is the world's leading importer of soybean oil 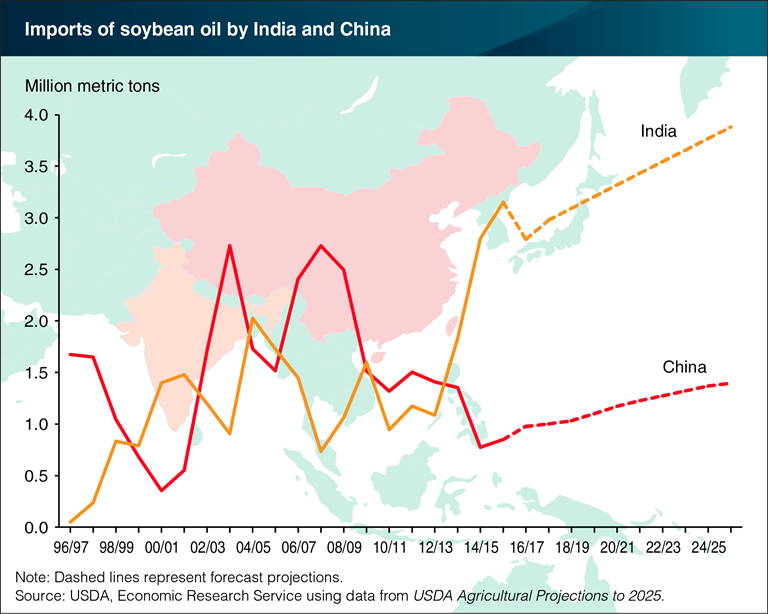 India is the world’s largest importer of soybean oil, surpassing China in 2013/14 as China’s expanding crushing industry began to focus on importing raw soybeans for processing into meal and oil. China’s soybean oil imports are projected to grow modestly over the next 10 years to reach 1.4 million tons by 2025/26, while India’s imports could reach 3.9 million tons over the same period. India’s large population and rising incomes, combined with poor soybean yields and limited area for expanding production, increase its reliance on imports to meet domestic vegetable oil demand. Despite its history of high import tariffs on vegetable oils—40 percent for soybean oil and as high as 85 percent for other oils—India has long been a major importer of vegetable oil. In 2008, in response to high food prices, India slashed its soybean oil tariffs, further contributing to the projected rise in imports. Argentina is the world’s largest exporter of soybean oil and the primary supplier to both India and China. The United States is the world’s second largest exporter of soybean oil, accounting for about 10 percent of global soybean oil trade, with most of that oil destined to markets in the Western Hemisphere. This chart is from the May 2016 Amber Waves article, “Major Factors Affecting Global Soybean and Products Trade Projections.”