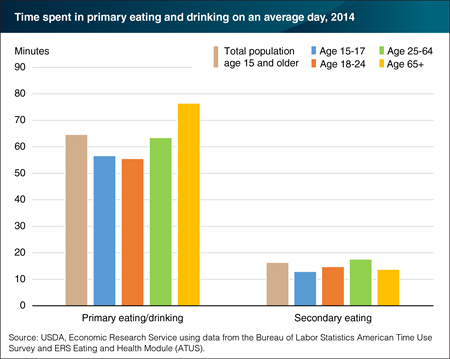 Analyzing the time Americans spend in various activities, and, in particular, food-related activities, may provide some insight into why nutrition and health outcomes vary over time and across different segments of the population. According to the ERS-developed Eating and Health Module of the nationally representative American Time Use Survey, on an average day in 2014, Americans age 15 and older spent 64 minutes eating and drinking as a “primary” or main activity. They spent an additional 16 minutes in eating as a secondary activity, that is, while doing something else such as watching television, driving, preparing meals, or working. People age 65 and older spent considerably more time on average in primary eating and drinking—76 minutes—than those in the younger age groups. Those age 65 and older who were employed spent about the same amount of time in primary eating/drinking and in secondary eating as their peers who were not employed, indicating that there may be generational differences in eating patterns not driven by the amount of time available in retirement. Working-age individuals, ages 25-64, spent the most time in secondary eating in 2014. This chart is from ERS’ Eating and Health Module (ATUS) data product, updated May 16, 2016.