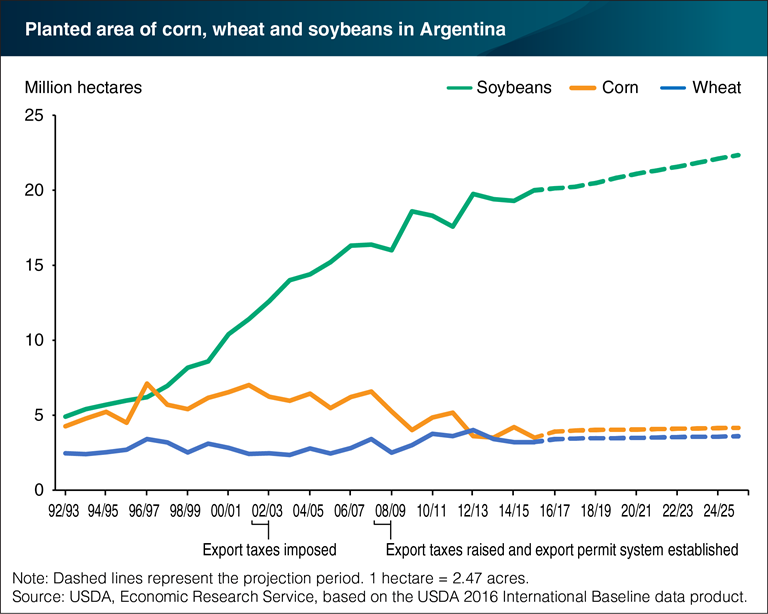 Land planted to soybeans in Argentina grew from fewer than 5 million hectares in 1992/93 (April-March) to 20 million hectares in 2015/16, while wheat and corn area has seen little or no growth over this period (1 hectare = 2.47 acres). Soybean meal is a major component of livestock feed, and growing demand for meat and livestock products worldwide has supported increased soybean production and trade. In Argentina, tax policies have played a role in soybean production as well. In 2002, the country imposed taxes on its agricultural exports as a way to generate government revenue. Argentina applies lower export taxes on soybean meal and oil than it does on raw soybeans, which stimulated the construction of large oilseed crushing facilities and, consequently, led to more soybean meal and oil exports. In 2008, the Government of Argentina increased export taxes and imposed a permitting system that further restricted exports of products such as corn, wheat, and beef. Soybean products face fewer obstacles in export markets and abundant opportunities to expand planted area through double cropping and adjusting crop-pasture rotations on marginal lands in the northwest part of Argentina. As a result, Argentina’s soybean area has expanded rapidly and is projected to reach over 22 million hectares by 2025/26. This chart is from the May 2016 Amber Waves article, “Major Factors Affecting Global Soybean and Products Trade Projections.”