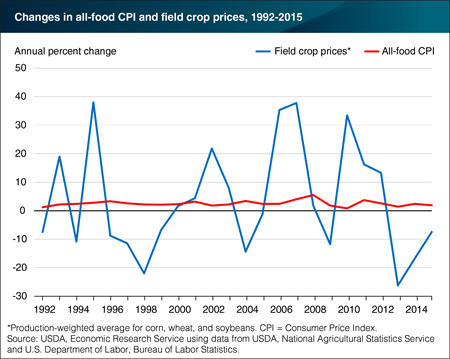 U.S. commodity prices are much more volatile than restaurant and grocery-store prices, suggesting that fluctuations in prices of major field crops—corn, wheat, and soybeans—have a relatively small impact on food prices. From 1992 to 2015, the average farm price of these crops, weighted by total production, has fluctuated widely year to year—falling as much as 26.2 percent in 2013 and rising as much as 38 percent in 1995 and 2007. All-food price inflation, on the other hand, averaged 2.5 percent per year over the same time period. One reason for the relative stability in food prices, as compared to field crop prices, is that food prices reflect the costs of processing, marketing, and retailing the food products in addition to the cost of the commodity inputs. ERS's 2014 Food Dollar Series reports that the farmgate price of all food commodities (crops and livestock) was 14.5 cents of every consumer dollar spent on food and beverages. This chart appears in Ag and Food Statistics: Charting the Essentials on the ERS website, updated April 12, 2016.