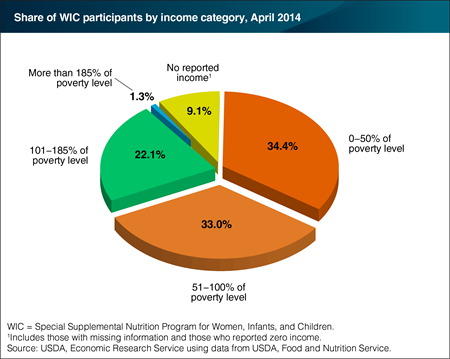 USDA’s Special Supplemental Nutrition Program for Women, Infants, and Children (WIC) provides supplemental food, nutrition education, and health referrals to low-income, nutritionally at-risk pregnant, breastfeeding and postpartum women, infants, and children younger than 5. In fiscal 2015, an average of about 8 million people per month participated in the program. Income eligibility for USDA’s WIC program is capped at 185 percent of the Federal poverty level. Among those participating in WIC in April 2014, 67.4 percent had incomes at or below poverty continuing the trend of increasing share of WIC participants with incomes at or below poverty which began in 2000. Slightly more than 1 percent of those participating in WIC in April 2014 had incomes greater than 185 percent of the Federal poverty level—similar to the shares since 2004. These individuals likely represent applicants who, because of their participation in Medicaid, automatically met income eligibility for WIC. In some States, the Medicaid income cutoff is higher than 185 percent of the Federal poverty level. This chart appears in the WIC Program topic page on the ERS website, updated March 16, 2016.