Participation in SNAP falls for the second consecutive year 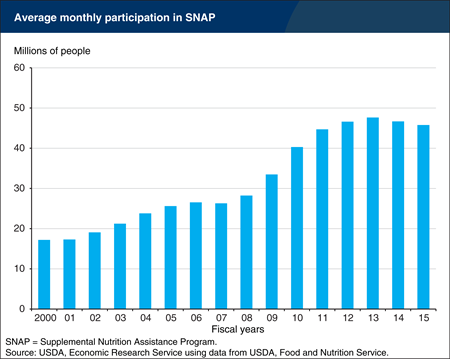 An average 45.8 million people per month—about 14 percent of the Nation’s population—participated in USDA’s Supplemental Nutrition Assistance Program (SNAP) in fiscal 2015. This was about 2 percent fewer people than the previous year, and 4 percent fewer than the historical high of 47.6 million participants set in fiscal 2013. SNAP participants in fiscal 2015 received an average of $126.83 per month in benefits to purchase food at authorized food stores. SNAP is one of the Nation’s primary countercyclical assistance programs, expanding during economic downturns and contracting during periods of economic growth. The decrease in SNAP caseloads in fiscal 2014 and 2015 reflects, at least in part, the recovery from the 2007-09 recession reaching lower educated, lower wage workers. This chart appears in ERS’s Food Assistance Landscape: FY 2015 Annual Report, released on March 17, 2016.