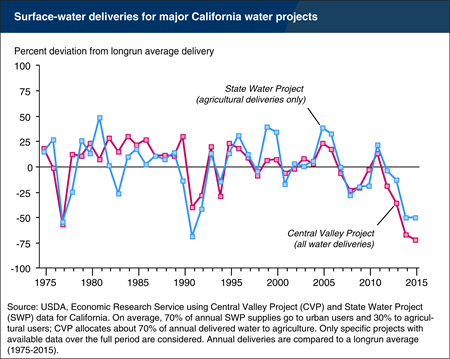 California is now entering the fifth year of a major drought, and by many measures, 2014 and 2015 have been the worst years of the drought for California agriculture. In California, measures of exposure to local water shortages are only part of how the drought is affecting farms. California agriculture relies heavily on irrigation, and much of the irrigation water is supplied by large-scale State and Federal water projects that store, transport, and deliver water across hundreds of miles. The two largest overarching mechanisms for delivering surface water in California are the State Water Project (SWP) and the Federal Central Valley Project (CVP). On average, 70 percent of annual State Water Project supplies go to urban users and 30 percent to agricultural users. In contrast, the Central Valley Project, managed by the U.S. Bureau of Reclamation, allocates, on average, about 70 percent of its delivered water to agriculture. Relative to longrun averages, deliveries from both projects were down modestly in 2012 and 2013, and then dropped dramatically in 2014, with similar delivery shortfalls for 2015. In an historical context, the current drought is at least as bad, from a deliveries perspective, as the 1977 and 1991-1992 droughts. While surface water from these projects is delivered through much of the State, the impacts of these reductions are most pronounced in the Central Valley of California. Farms in Southern California receive much of their surface water from the Colorado River, which has not been as heavily impacted by the current drought. This chart is found in California Drought: Farm and Food Impacts on the ERS website, February 2016.