Southern regions in the U.S. have the highest rates of cover crop adoption 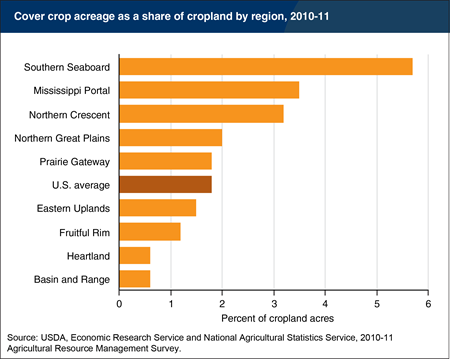 Cover crops are thought to play a role in improving soil health by keeping the soil “covered” when an economic crop is not growing. Cover crops reduce soil erosion, trap nitrogen and other nutrients, increase biomass, reduce weeds, loosen soil to reduce compaction, and improve water infiltration to store more rainfall. The 2010-11 Agricultural Resource Management Survey was the first USDA survey to ask respondents to report cover crop use (findings from the 2012 Agricultural Census—the most recent available—are similar). Approximately 4 percent of farmers adopted cover crops on some portion of their fields, accounting for 1.7 percent of total U.S. cropland (6.8 million acres) in 2010-11. Cover crop adoption was highest in the Southern Seaboard (5.7 percent) and lowest in the Heartland and Basin and Range (0.6 percent each). This distribution is likely due to the fact that cover crops are easiest to establish in warmer areas with longer growing seasons. Limited cover crop use overall, however, suggests that the benefits of cover crop adoption are being realized on few acres. This chart is from the ERS report, Conservation-Practice Adoption Rates Vary Widely by Crop and Region, December 2015.