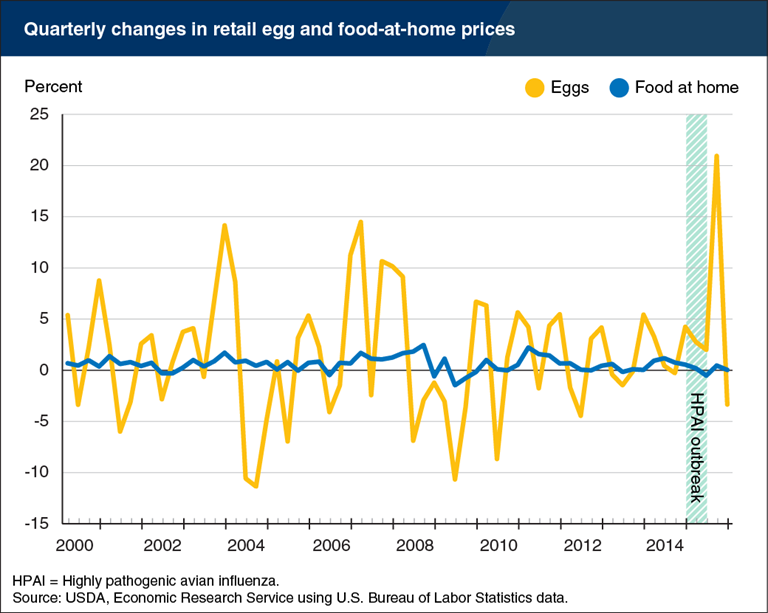 Egg prices are among the most volatile in the grocery store. Unlike many other retail foods, shell eggs have a limited shelf life—they cannot be frozen or canned. If demand increases or supplies fall, there is limited inventory to draw upon and retail prices may rise. While some price fluctuations are expected due to seasonal demand for eggs throughout the year, there have been some above-average price increases over the past 16 years, mainly due to disease outbreaks affecting poultry or surges in feed prices. The most recent upswing in retail egg prices was largely due to an outbreak of highly pathogenic avian influenza (HPAI), which affected table-egg-laying flocks, primarily in the Midwest. To contain the outbreak, which ran from late 2014 to June 2015, producers destroyed about 33 million hens (roughly 11 percent of U.S. egg-laying hens). Retail egg prices rose 20.9 percent in the third quarter of 2015, and egg prices in September 2015, were 36.2 percent higher than in September 2014. As the industry recovers from the outbreak, retail egg prices have begun to adjust, falling 3.3 percent in the fourth quarter of 2015. This chart appears in “Retail Egg Price Volatility in 2015 Reflects Farm Conditions” in the February 2016 issue of ERS’s Amber Waves magazine.