Not all California's crops have seen declines in acreage during drought 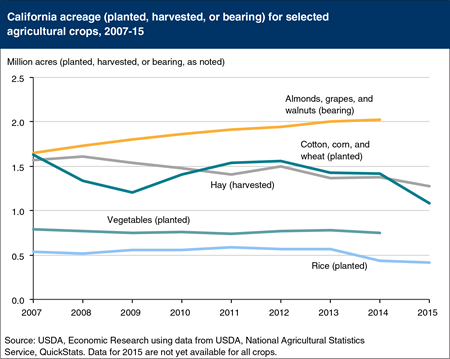 Long-term trends in California agriculture reflect shifting production, which may have implications for water use during droughts. Annually harvested crops such as cotton, corn, and wheat are on a downward trend and have seen a 31-percent reduction in planted acreage in California since 2012. Similarly, rice acreage has dropped 27 percent during the past 2 years (2013-15) of the drought. California’s hay and vegetable acreage has been more stable. In contrast, almonds, grapes, and walnuts acreage is on a strong upward trend that does not appear to have slowed during the drought. Orchards and vineyards require larger capital investments than annual crops, and because of the potential loss of that investment, orchard/vineyard owners are generally less willing to reduce water usage during droughts. However, orchards and vineyards are also more dependent upon ground-water than volatile surface-water supplies. California orchard/vineyard farmers are also more likely to have invested in more-efficient irrigation systems, such as low-pressure sprinkler and micro-irrigation systems that reduce water lost to evaporation, runoff, and deep percolation, thereby increasing the share of applied water that is beneficially used by the crop. This chart is found in the November 2015 Amber Waves statistic, “Long-Term Response to Water Scarcity in California.”